I am realizing a project focusing our migration to Austria in 1992. The third  photograph (2019) shows the north facade of our house in Bosnia, which we left unfinished. Since 2011, work has been taking place periodically to finish it. The picture-in-picture is the recently installed window reflecting the surrounding view. The bottom part of the reflection shows the dike, protecting the area from the river Sava. Above the dike you can see the autumn trees across the river. They grow on the Croatian side, now one of the European Union’s external borders.

A few years ago I started collecting images and videos which might represent the sites of our migration. In the first few years, we were hosted as refugees by three families in Austria. We lived in foreign houses while our own unfinished house in Bosnia at first was inhabited by soldiers, then by refugee families from other Balkan regions.

In 2016, we started to renew the roof in order to preserve it from weather. At that time I had the idea to reflect our individual migration history, which is embedded in collective migration processes, by focusing on this house in Bosnia and the immediate area where it is located. Most of the houses remained unfinished; the area is characterized by orange and blue brick walls which I dimly remember going up all around at this place. The house(s) seem like memorials or monuments, new constructions at the same time ruins, symbolizing the collapse of Yugoslavia and the waves of migration that followed in its wake.

Images and videos are projected from the inside out of the window apertures. This ephemeral installation process will be realized over a period of one year and is being recorded with camera. Also the window-reflections will be part of the  material. As the film is intended for screening at film festivals, I am planning exhibitions to displaying the project showing photographs in combination with some of the recorded videomaterial.

Like ripples from a stone thrown in water, examinations in various media and further perspectives on this region‘s history are emerging.

The last three images here are film stills, displaying already recorded projections, showing the facade and surroundings of one of the houses where we stayed in Austria. As a part of the project itself, we visited the families we used to live with, not only to reconnect with them, but also to take video and photo footage of their houses and the adjacent areas. 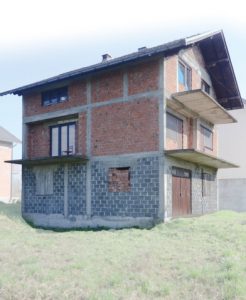